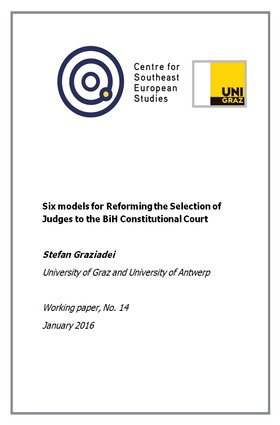 Description:
Following the decision on the unconstitutionality of the Day of the Republic (U-3/13) in late 2015, Bosnian Serbs and Croats vowed to terminate the mandate of international judges of the country’s constitutional court. If the Bosnian parliament failed to act, political leaders from the Bosnian Serb entity would call a referendum on the Court and drop out of state institutions. Against the backdrop of this political threat, Bosnians need to debate if they still need international judges or whether the Court’s composition should be reformed. Comparatively, the presence of international judges in national apex courts remains an exception. This paper will not enter the debate on whether it is time to call time on international judges, but will show how the composition of the Court could be reformed. Politicians could draw inspiration from several models discussed in the paper: the domestic model, the German model, the Belgian model, the ECtHR model, and the D’Hondt model. However, the possibility is not excluded that the very changes that Bosnian Serb politicians demand might require constitutional reform.

About the author
Stefan Graziadei has studied Political Science at the University of Padua, the UWE Bristol, the ULB Brussels and the University of California in San Diego. His academic interest focuses on comparative constitutional law, comparative politics, minority rights, the politics of divided societies, Europeanization and, in relation to that, post conflict state building in former Yugoslav societies. He is fluent in German, Italian, French, English and Spanish. His doctoral research analyzes how constitutional courts shape and are shaped by the constitutional structure of consociations. He is a PhD student at the Universities of Antwerp and Graz; you can contact him at stefan.graziadei(at)uantwerpen.be; or Stefan.graziadei(at)edu.uni-graz.at.