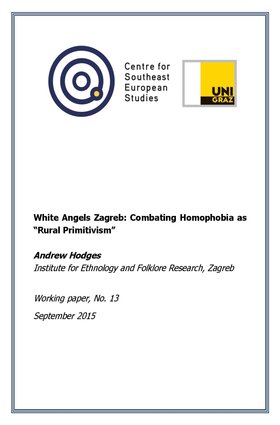 Description:
White Angels Zagreb (WAZ) is an exception in the post-Yugoslav football fan scene. In contrast to many other ultras groups with predominantly right wing/nationalist platforms, WAZ organizes actions that aim at decreasing homophobia on football terraces. This chapter draws upon media-clippings, the group’s fanzine and my own involvement in the group to examine how WAZ frames its anti-homophobia as a struggle against ‘primitivism’ in football. By ethnographically exploring the concept of primitivism in the context of urban-rural distinctions in the post-Yugoslav space, I argue (1) that this conceptual binary is central in how White Angels members describe their relationship with other fan groups in the region; (2) that WAZ simultaneously complicate this conceptual binary opposition contrasting urban kultura with rural primitiveness, as they implicitly position themselves as nekulturni ne-primitivci (uncultured non-primitives). An openness to difference, and especially sexual difference, forms the basis of how the group makes urban-rural distinctions when comparing themselves to other groups in the regional fan scene. In this regard, homosexuality and the struggle against homophobia constitute a new axis of division by becoming elevated as markers of a specifically urban/non-primitive fan habitus.

About the author:
Andrew Hodges works as a postdoctoral researcher at the Institute of Ethnology and Folklore Research in Zagreb, as a NEWFELPRO/Marie Curie fellow. His research project is an ethnographic study of the social, political and linguistic effects of teaching in Croatian schools in Subotica (Serbia). Beside this project he is also involved in the leftist ultras group White Angels Zagreb and has published anthropological articles on football supporters in Zagreb. Andrew’s doctoral research, at the University of Manchester, involved 18 months of ethnographic work with scientists and students in Belgrade and Zagreb. He has two master degrees from the University of Manchester, one in the history of science and the other in anthropological research. For his undergraduate studies he was based at Clare College, University of Cambridge, completing a dissertation on the history and philosophy of science. He has also worked as a journalist in Croatia, writing for the portal h-alter, where he has published an interview conducted with the Serbian football player Ivan Ergić.