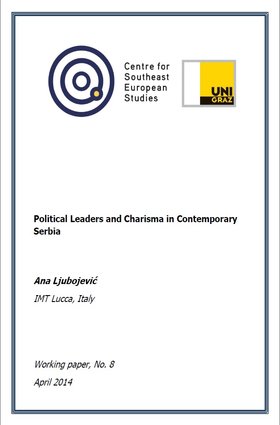 Description:
In the aftermath of armed conflict in (former) Yugoslavia, new successor countries had to invent their own national traditions. This diversity of historical memory created resources which could have been used by ambitious leaders. The paper describes the myth making mechanisms and charisma construction from the viewpoint of relations between leader and their followers in Serbia. Special attention is given to the socially constructed support that evolved into new martyrdom and chosen people’s myths. Following Gradner and Avolio’s theatrical approach in explaining charisma, the paper identifies causes and consequences of society’s need for “extreme” characters. Two case studies of current and ex-leaders that differ almost exclusively in the existence or absence of charisma are analysed in detail. This paper focuses on charisma re-construction of former leaders Milošević and Šešelj while on trial before the International Criminal Tribunal for the former Yugoslavia and the lack of charisma of their successors Koštunica, Dačić and Nikolić.

About the author:
Ana Ljubojevic obtained a MA degree in Human Rights and Humanitarian Intervention at University of Bologna, Italy and a PhD in Political Systems and Institutional Change at IMT Institute for Advanced Studies Lucca, Italy. She is currently a visiting fellow at the Centre for Southeast European Studies at the University of Graz, Austria. Her research area is transitional justice in Western Balkan countries, with a special interest in historical narratives about the war. In 2010, she completed a regional project in shared narratives on political mythmaking in former Yugoslavia after 1945. During the academic year 2010/2011 she was a Visiting Researcher Fellow at the Centre for the Study of the Balkans at Goldsmiths College, University of London. In 2013, Ana was appointed as a Researcher in three years Project on Impact of International Criminal Tribunals, lead by the University of Social Sciences and Humanities from Poland and Institute of Social Sciences from Serbia.