European Union’s Political Conditionality in Serbia: Substantial impact or yet another box-ticking? 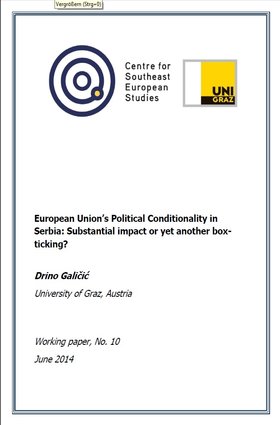 Description:
In Serbia, the European Union constantly faces the dilemma between substantial democratisation and mere political stability. This paper analyses the pattern governing EU’s conditionality policy towards Serbia in the last decade and tries to depict circumstances of strict vs. flexible application, as well as their respective consequences for democracy promotion. It finds that such variation in models of conditionality produce a rather weak pattern of compliance by the targeted state. It also finds that under the EU impetus, Serbia only recently started to dismantle the link between the state and "informal centres of power", thus representing a serious shift towards a more substantive 'Europeanization'. Accordingly, this paper hypotheses that if the conditionality continues to be based primarily on the 'external incentive model' of EU governance, as theorised in the literature and conceptualised as a one-way hierarchical relation, it will remain rather ineffective and limited in scope. It therefore tries to address reasons for resistance to the implementation of conditionality not solely by political elites, but society itself. Drawing on such analysis, and against the recent background of de-blocking the European path for Serbia, the paper concludes that EU conditionality has started to evolve towards producing a more substantial impact on the candidate state, but that the risk of rather formalistic fulfilment of conditions still remains.

About the Author:
Drino Galicic is a PhD candidate of the Joint Programme in Diversity Management and Governance at the University of Graz. His field of research is European integration in the Western Balkans and the use of EU Conditionality in the area of Rule of Law, Human and Minority rights. Drino graduated at the Law Faculty of the University Paris I – Panthéon Sorbonne with the major in Law of the European Union and holds a Specialised Master Degree from the Law Faculty "Jean Monnet" of the University Paris-Sud. Professionally, Drino has been working for 15 years as legal adviser on constitutional, judicial and legal reform in South-East and Central Europe within major international organisations, currently staff member of the European Union Delegation/EU Special Representative in Bosnia and Herzegovina.