What Role for the EU Special Representative in Bosnia and Herzegovina after Lisbon? 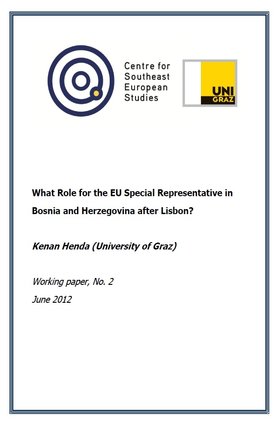 Description:
EU Special Representatives used to be an avant-garde policy instrument of EU external action. With the entry into force of the Lisbon Treaty and the establishment of the European External Action Service their role is being reassessed, reflecting the aspiration of the Lisbon external action operational structure to become more coherent, more visible and more effective. This working paper aims to analyse the recent establishment of the reinforced Union presence and its new “double-hat” – Head of EU Delegation/EUSR – in Bosnia and Herzegovina. The paper argues that because of the “specific” constitutional and political situation in BiH, the latter still needs the High Representative and his Office (OHR) with the possibility to intervene in the political process if necessary. The argument is put forward that the recently established reinforced Union presence can only become fully effective when the HR and his Office have implemented their mandate as defined in the Dayton Agreement. In the meanwhile, BiH citizens and the Union need to engage into a “constructive partnership”, in order for BiH to come forward in the Stabilisation and Association Process. Before coming to such conclusions, the paper establishes a framework of reference by addressing the “Bosnian-Herzegovinian” context.

About the Author:
Kenan Henda holds a MA in Law and a LL.M. in South-East European Law and European Integration from the Karl-Franzens University of Graz. His research interests include law and EU external action, international human rights law, public international law and comparative constitutional law as well as transitional justice. He is also interested in the intersections between law, history, sociology and political philosophy. This working paper is developed from his Master thesis "The European Union Special Representatives after the Treaty of Lisbon – What Role for the EU Special Representative in Bosnia and Herzegovina?“ (Graz, June 2011), supervised by Hubert Isak and Joseph Marko.