Intervening in the Media Sector: Media Anarchy in post-war Bosnia and Herzegovina 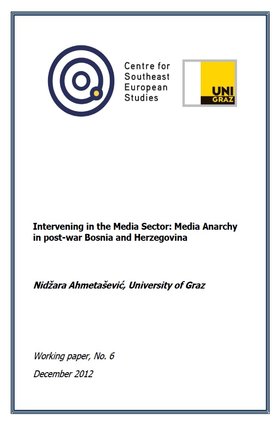 Description:
Following the war in Bosnia and Herzegovina the media, as well as the country, were divided along ethnic lines. There were no rules and laws to regulate this field. The international community intervened and imposed a type of media protectorate. In a period of 10 years, laws were written and a regulatory system established as part of the efforts to enhance democratisation of the country, and to help state-building. But, the effects are limited and local media are still struggling with a lack of freedom while the regulatory system is weak and politicised. What has been done, what has been achieved, and how this reflects on the professionalisation of the media and democracy in the country (if at all), are some of the questions that I tackle in this paper.

About the author
Nidžara Ahmetaševic is a PhD candidate of the Joint Programme in Diversity Management and Governance at the University of Graz. Her field of research is on democratisation and media development in post conflict countries. Before coming to Graz, she spent one year at the University of Kent on a Chevening Scholarship. Nidžara holds a Masters in Human Rights and Democratisation in South East Europe, a joint program of the Universities of Sarajevo and Bologna. Her thesis was on the political propaganda in broadcast media in Serbia, Croatia and Bosnia and Herzegovina during the wars of the 1990s. Before her master studies, as a Ron Brown Fellow, (A US State Department award supporting young professionals from Central and Eastern Europe), she spent one year at DeWitt Walice Center for Media and Democracy, Duke University, North Carolina. Nidžara has a long career as a journalist covering human rights, foreign policy and transitional justice issues in Bosnia Herzegovina and the wider region.