Civil-Military Cooperation in Conflict and Post-Conflict Operations: Learning from the Lithuanian, Slovenian and Estonian Experiences 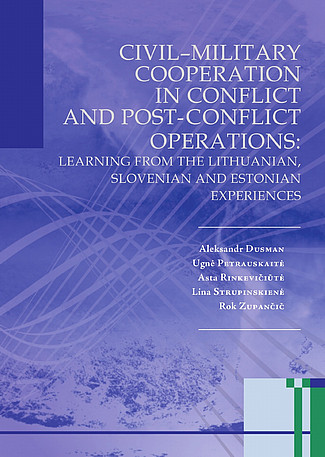 Description:
Increasingly complex post-conflict operations require joint efforts of a variety of actors: military, international governmental organizations, NGOs, various foreign and local government agencies, business, etc. These different entities have different responsibilities and comparative advantages in post-conflict stabilization, rehabilitation, reconstruction and development operations. However, their actions ought to be well coordinated to contribute to an effective conflict resolution. Yet, in most cases problems in these relationships are prevalent. Different modes of organization, for example, the horizontal methods of coordination in the non-governmental sector versus the hierarchic coordination of the military, often impede the efficient interaction between the two sectors. Mutual inflexibility results, in some cases, in an overall elimination of the non-governmental sector from the postconflict stabilization efforts. A similar effect might also be produced by differences in agendas of the civil and military sectors. For example, the civilian sector tends to focus on the development projects that are longterm, and the military usually work on short-term containment issues. The lack of coordination between the varied agendas and goals may result in additional tensions between the civilian (both governmental and non-governmental) and the military actors present in conflict and postconflict zones and sometimes undermine the overall efficiency of the mission. These and similar challenges are mainly rooted in a poor exchange of best practices among different actors and countries. Afghanistan could be a good and up-to-date example. Before the transition period, there were twenty-seven PRTs in Afghanistan, commanded by more than ten states participating in the International Security Assistance Force (ISAF) Afghanistan. Each of the countries has a slightly different pattern of conducting civil–military cooperation and the exchange of information on most common challenges of civil–military cooperation and best practices remains very limited. Whereas countries with previous experience can at least use their own institutional experience, newcomers cannot do so. Therefore, the overall objective of this project is to create a dialogue between the Central and Eastern European nations to learn the best practices of dealing with challenges and thus to promote a more effective civil–military cooperation for peace and conflict resolution