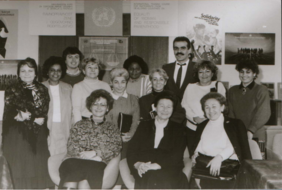 The talk will discuss women’s internationalism and Non-Aligned connections established between Yugoslavia and the Global South, with a specific focus on Slovenian lawyer and politician Vida Tomšič (1913-1998) and Serbian policy expert Nevenka Petrić (1927-2015), who had leadership roles in Yugoslav and international institutions, notably the Conference for the Social Activity of Women (KDAŽ), the Yugoslav Federal Council for Family Planning (SSPP), and the International Planned Parenthood Federation (IPPF). I will look at how these leaders expressed Non-Aligned standpoints and established alliances with women’s organizations and activists in the Global South in international settings, particularly in relation to pressing issues such as proposals for a New International Economic Order (NIEO), neo-Malthusianism in international population policies, and the UN Decade for Women (1975-1985). Based on their correspondence, I will also investigate how Tomšič and Petrić worked together for decades, as scholars, activists, and friends.

Chiara Bonfiglioli is a Lecturer in Gender & Women’s Studies at University College Cork. She received her PhD in gender studies from Utrecht University in 2012. Between 2012 and 2017 she held post-doctoral fellowships in Edinburgh, Pula and Vienna. Her research addresses gender, women’s and feminist history from a transnational perspective, with a specific focus on the former Yugoslavia and Italy. She is the author of Women and Industry in the Balkans: The Rise and Fall of the Yugoslav Textile Sector (I.B. Tauris, 2019).