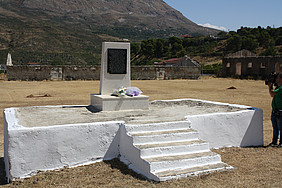 They [the Albanian Socialist State] even interned small children (1 or 2 years old) in horrible conditions in Tepelena [Internment and Labor Camp]. …so, we call that [place] the “Auschwitz of Albania.” – Reshat (pseudonym)

In this presentation Kailey Rocker  explores contemporary Albanian commemoration debates over how to count, mourn, and represent those lost during the country’s socialist regime, from 1944 to 1991. While Socialist-era Albanian internment, prison, and labor camps bear a striking resemblance to the gulag system popularly represented in works like Aleksandr Solzhenitsyn’s The Gulag Archipelago, during my fieldwork in 2017 to 2018 I witnessed a number of debates linking such sites more broadly to Holocaust memorial narratives. Young state employees like Reshat born in the 1990s drew on the collective imaginary of the Auschwitz-Birkenau concentration camp to express the gravity of loss he felt at sites like the former Tepelena Internment and Labor Camp, which operated from 1949 to 1954 in southern Albania. While Albanians’ use of Holocaust commemorative frameworks to make sense of victimization and loss following World War II speaks to the increasing cosmopolitan nature of Holocaust memory (Levy and Sznaider 2002), it equally speaks to narratives of what it means to be European today. In this presentation, I explore Albanians’ use of Holocaust narratives in light of what Jelena Subotić (2019) calls memory appropriation. As I demonstrate in this presentation, such memory appropriation and attempts to make sense of past suffering in Albania is juxtaposed between two parallel tracks: Albanian efforts to participate in broader European memoryscapes and the European Union’s efforts to secure itself and its own memory narratives.

Kailey Rocker is a Junior Fellow in the Field of Excellence “Dimensions of Europeanization” at the University of Graz. She has received her PhD in anthropology from the University of North Carolina at Chapel Hill (UNC). Her dissertation titled “Translational Justice: Facing the Past to Take on the Present in Albania” examines the role that the state, civil society, and young adults play in shaping Albania’s efforts to deal with the past while creating a viable future for themselves and their country – 30 years following the collapse of state socialism in Albania. She holds an MA in Anthropology from UNC and a BA in Sociology and Anthropology from Millsaps College in Jackson, Mississippi.