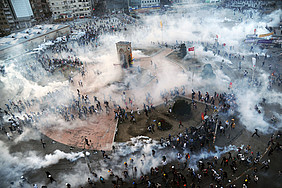 Even though the thrill of resistance and the hopes for change have soon been replaced by increasing political repression, the popular uprisings and mass mobilizations of the last decade have created euphoric excitement with the distinctive experiences of solidarity and togetherness of diverse political actors.  They did so through not only different forms of collective action but also collectively shared emotions and affective resonances at the heat of the protests. However, there is still a lack of analysis based on empirically grounded research on these potentially transformative moments with regard to their sustainability and potential for political change. Directing attention to the much-neglected research field in the protest movements, this research explores the emotional and affective dynamics of popular protests and collective action focusing on Turkey’s Gezi uprisings of 2013 and the post-Gezi political landscape in the context of anti-government protests and alliances. Based on a multi-sited ethnography in two cities of Turkey -Istanbul and Eskişehir- with the participants of the uprisings and the members of the post-Gezi local urban alliances in 2016 and 2017, it analyzes the multi-layered affective components of the uprisings in and beyond the occupied parks and squares. It also examines the effects and echoes of the uprisings over time and space by taking a closer look at subsequent moments of contention with politically revitalizing or immobilizing effects on Turkey’s dissent in the post-Gezi political landscape.

Derya Özkaya is a postdoctoral researcher at the Centre for Southeast European Studies (CSEES) at the University of Graz. She received her Ph.D. in Political Sciences from the Otto Suhr Institute of Political Science at Freie Universität Berlin in 2020. Her research interests center on the political anthropology of collective action and resistance, theories of collective emotions and affect in politics, political movements, and collective memory with a particular focus on Turkey.