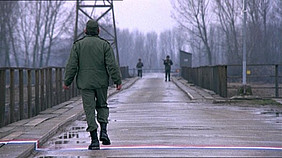 This paper will address the narratives of borders on the European periphery, in the context of migration, the refugee crisis and the increased popularity of far-right politics. Starting from a symbolic reading of a short scene in the film Morgen (Marian Crisan, Romania/ Hungary/ France, 2010), in which the main character, who lives close to the Romanian-Hungarian border, attempts to cross the border with a fish he had caught on the Hungarian side, in which the fish and their discussion of identities and borders becomes symbolic of a wider conversation—of whom and what is admissible across the border. Here, as in other films –for example in Spectres are haunting Europe (2016) – the dichotomy between that which is admissible – cross-border commerce, and globalization of goods – comes in contrast with the subjects which are rejected (migrants, refugees, oftentimes seen as the inadmissible other).

I will discuss the ways in which these documentaries construct the idea of the European border. I will focus mainly on the 2018 film Letter to Theo (Elodie Lelu, Belgium/Greece), in which the filmmaker explores Theo Angelopoulos’s perpetual pursuit of understanding the other as quintessential not only to cinema but to life in a world that is increasingly interconnected.

Raluca Iacob is an independent researcher and works for the Astra Documentary Film Festival. She obtained a PhD from the University of St. Andrews, with a thesis on postcommunist Romanian cinema. Her work has been featured in Film Criticism, Frames, Apparatus Journal and is forthcoming in New Romanian Cinema. Her research interests include world cinema, documentary studies, communist and post-communist cinemas, and critical theory.