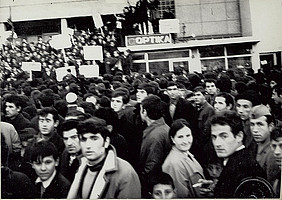 Following the 1968 and 1981 demonstrations in Kosovo, many Kosovo Albanians who had participated in the unrest were arrested and subsequently banned from working or studying in the region. These individuals were often forced to leave and go abroad to seek refuge and greater opportunities. These exiled individuals followed the well-worn path of the Gastarbeiter who had left Kosovo in previous decades to live and work in Central Europe, forming what is often referred to as the Kosovo Albanian diaspora. In the years that followed, various political and nationalist organisations which sought to incite political and social change in Kosovo were established in Central European countries such as Switzerland and West Germany by those who were part of the diaspora. This presentation will provide further insight into these frequently overlooked organisations and highlight the fundamental role that they played both in Kosovo and abroad.