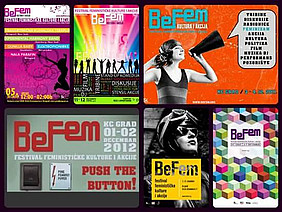 The (post)-Yugoslav feminist movement is academically and politically well-known for acting autonomously during state socialism and for its anti-war engagement during the transition. Yet, despite such previous critical attention, little has been written about how feminists carry on the (post)-Yugoslav legacy in the 21st century. My presentation addresses this gap by focusing on the primary activist innovation that rose to prominence after the year 2000 – festivals. A close look at more than twenty feminist and LGBTQ+ festivals in six Yugoslav successor states reveals a vibrant millennial activist scene that used festivals to adapt feminist and queer politics to contemporary life by combining local and global traditions. Today’s talk firstly, explains festivals’ historical role in politics from the proto-feminist street theater during the French Revolution to the Riot Grrrl movement; and secondly, illustrates how festivals provided opportunities for the post-Yugoslav millennial generation to challenge mainstream politics of gender equality and experiment with different approaches and aesthetics. In particular, I identify three aspects of the organizers’ and contributors’ interventions which intended to popularize feminist and LGBTQ+ politics: redefined emotional approaches, do-it-yourself organizational practices and discourses combing feminist with leftist and queer traditions. I illustrate the findings through excerpts from interviews and forums, exhibitions and performances. This study makes an original contribution to the sociological understanding of gender and contentious politics in post-socialist Southeastern Europe that rejects common assumptions of a politically passive millennial generation and urges for a redefined understanding of political acting.

Zorica Siročić holds a PhD in sociology (SOWI, University of Graz, 2019) and MA degrees in political science from the University of Zagreb (2009) and the CEU (2010). Her research and teaching for the last five years has focused on contentious politics of gender, sociology of social movements, and studies of post-socialist Southeastern Europe. Festivals and feminist politics in the post-Yugoslav territory received the yearly award for the best dissertation at the Faculty of Social and Economic Sciences of the University of Graz.