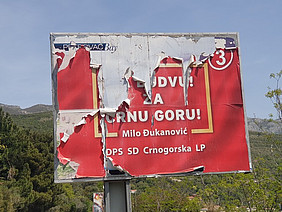 Vanja Calovic Markovic,
Executive Director of the NGO MANS, Montenegro, Member of the Advisory Board of the Balkan Trust
for DemocracyJelena Džankic,

Professor in the Global Governance Programme at the Robert Schuman Centre of the European University
Institute in Florence, Italy, Co-Director of the Global Citizenship Observatory (GLOBALCIT)

The parliamentary elections in August 2020 marked the first turnover of power in Montenegro since the end of
socialism in 1990. Until then, Montenegro had been governed by the Democratic Party of Socialists (DPS), the
heir to the League of Communists of Montenegro. Three decades of the DPS in power have left an imprint on
Montenegrin politics and society. The new government, appointed on 4 December 2020, is composed of three
different coalitions: ‘For the Future of Montenegro’, ‘Peace is our Nation’, and ‘Black and White’. This ideologically
diverse coalition is united by little more than its joint opposition to the DPS, declaring the dismantling of
the DPS-regime its primary goal.
What progress has the new government made in achieving its main objective so far? How realistic is its promise
to dismantle the DPS’ hegemonic position? And what other interests does the new government represent?
The panel attempts to answer these and other questions by assessing the first six months of Montenegro’s new
government. The discussion will highlight the challenges presented by the long-lasting rule of the DPS in the
areas of the rule of law, systemic corruption, and the entanglement of informal networks with the state. The
discussants will also focus on the new government’s foreign policy, the Serbian Orthodox Church, and competing
nationalisms in Montenegro.

Register in advance for this meeting:
https://us02web.zoom.us/meeting/register/tZ0ldOqsqT8qG9F5-eicNSMdwBTZ2gM3KjuW

Brownbag: Locating the Black presence in the Balkans: Family Histories and Memories