The Socialist Party of Serbia 1990-2000: Political Impotence of the Organizational Omnipotence 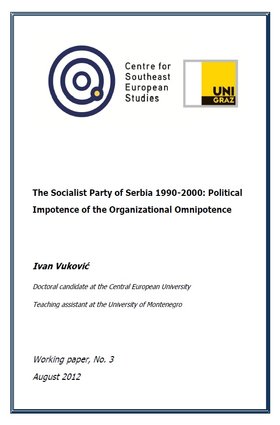 Description: This paper seeks to explain the role played by the Socialist Party of Serbia (SPS) in functioning of the Serbian hybrid regime in the 1990s. It argues that, on the one hand, owing to considerable financial assets, infrastructure and membership inherited from the Serbian League of Communists (SKS), the SPS had a substantial advantage over its rivals in political competition, critical for the regime’s maintenance. At the same time, it contends that, as a result of the absolute concentration of authority in the hands of its leader Slobodan Milošević, the capacity of the SPS, as a political actor, to influence the processes of decision-making that determined the regime’s dynamics was largely insignificant. In other words, because of the way its organizational power was structured – which, despite being important dimension of party strength, is analytically neglected in most of the related works - the SPS, rather than a political value per se, turned out being a mere political tool of its president.

About the Author:
Ivan Vuković is a doctoral candidate at the Department of Political Science of the Central European University in Budapest. In addition, he works as a teaching assistant at the Faculty of Political Science of the University of Montenegro. The working title of his doctoral dissertation is ‘The Post-Communist Political Transition of the Western Balkans: Croatia, Montenegro, and Serbia between Yugoslav Past and European Future’ (supervisor: Zsolt Enyedi). His main research interest relates to general problems of political transition and democratization of the post-communist European states and, in particular, the political dynamics of so-called hybrid regimes in this region and beyond.