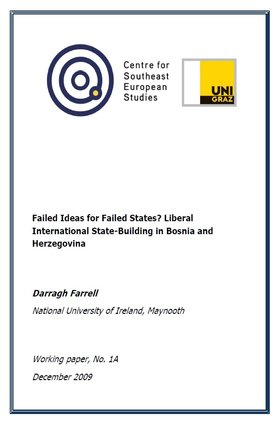 Description:
In state-building attempts, such as those presently being undertaken in the divided societies of Kosovo, Iraq and Afghanistan, for example, liberal international interventionism has a number of recommended tools at its disposal. These include economic reforms, electoral engineering and the promotion of favourable domestic political elites. This paper examines the international state-building efforts in Bosnia and Herzegovina, a country which is in many ways the prototype for later, similar international action, assessing whether the liberal reforms used have been successful in achieving their aims. The various liberal reforms alone may not be sufficient in resolving the problems of what are deemed ‘failing’ states by Western liberals. The paper contends that those same ‘failing’ states must settle fundamental questions surrounding the “stateness of the state” in order to provide the foundations necessary to resolve the fractures and ‘failings’ which justified international administration in the first place.

About the Author:
In 2008, Dr. Farrell completed his PhD entitled Democracy Promotion, Domestic Responsibility and the Impact of International Intervention on the Political Life of the Republika Srpska in the Department of Sociology at the National University of Ireland, Maynooth. Affiliated to the Centre for the Study of a Wider Europe at NUI Maynooth, Dr. Farrell has authored a number of articles on the politics of the Republika Srpska and Bosnia and Herzegovina. He is currently undertaking further research in Bosnia and Herzegovina.