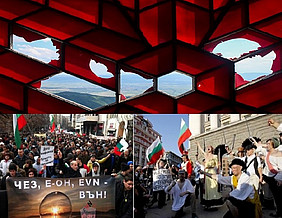 “Neoliberalism and the crisis of the capitalism seminar in 2011 gave me the hope that not all is lost in Eastern Europe. This summer school was an opportunity to federate a network of researchers from the region sharing similar political beliefs.” (D. R., historian, PHD student, activist)

This project explores the constellation of “committed” groups of young researchers that has emerged in or between different East European countries. This presentation focuses specifically on the academic and political socialization of this new generation in Bulgaria, where two waves of protests movements in 2013 portrayed a divided society. The debate about these protests also mapped a new intellectual space. The issue of “civil society” – a key concept of the dominant epistemic and political logic of the “postsocialist” period – becomes central to understanding the fractures reinforced by the debate. Influenced by the specific aspects of East European experience and connected to a cross-regional dialogue, the researches and the activities of this generation bring a new perspective to the critic of the global neoliberalism, previously dominated by the alterglobalism based on the experience of the Global South.

Svetlana Dimitrova is interested in the relationship between histories, sociologies and geographies of the knowledge. Trained in Bulgaria and France, she is lecturer at the Institute of Social Work (IRTS)-University of Paris North. She holds a PhD from the EHESS, Paris. She is currently a fellow at the University of Graz’s Dimensions of Europeanization program.