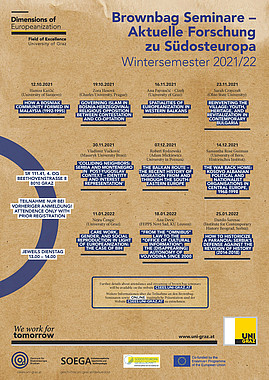 BB: Danilo Šarenac - How to Historicize a Paranoia: Serbia’s defense against the Revision of History (2014-2018)

Already in the summer of 2013, it became quite clear that something was wrong with Serbia's preparation for commemorating the Centenary of the Great War. The problem did not lie in the fact that Serbia still did not have any official plan nor program. Namely, the issue was far more sinister. The public strongly believed that there is an international conspiracy, now known under the term revision. The alleged aim was to blame Serbia and to some extent Russia, for the outbreak of the First World. However, I argue that the above-mentioned panic reaction was caused by more recent conflicts. By arguing over the role of Gavrilo Princip and the July Crisis of 1914, the state position was being entrenched concerning the interpretation of Yugoslavia’s violent collapse of the 1990s.