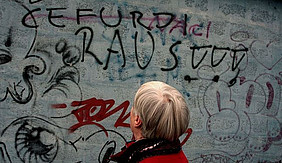 Source of the picture: www.lupiga.com

The dissertation focuses on everyday aspects of nationalism, respectively, how the nationalism is reproduced and represented in everyday life and in (popular) culture in Slovenia, regarding the second generation of migrants from former Yugoslav countries. It follows five dimensions of everyday nationalism, respectively, spatial, temporal, cultural, political and self/other. The spatial and temporal dimension will be primarily observed through the lens of territory and borders, while the political dimension of Slovenian domestic and foreign policy regarding the migrants from FYR will be mostly observed through the minority issues and the case of Erased people. In the cultural dimension, the relationship between Slovenian / European culture and the "non-Slovenian / Balkan" culture is demarcated, as well as how FYR migrants are treated in Slovenian popular culture and media. The last dimension will focus on everyday situations and discrimination with which the members of the second generation of migrants encounter.

Martina Plantak is a Ph.D. candidate in Politics at the joint Ph.D. program between Andrassy University Budapest and Danube University Krems. She completed a Master's degree in International Relations and Diplomacy in Zagreb, Croatia.  Her main research interests are nationalism, media, Europeanization, and Western Balkans. Currently, she is working on her thesis concerning the nationalism and identity policies of the second generation of migrants from former Yugoslav countries in Slovenia. Martina has written articles on Europeanization and regionalization of media in Western Balkans, and the role of music as a tool of political propaganda.