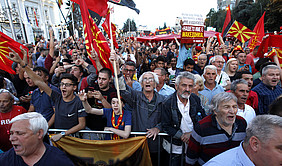 Exposure to media content on immigration does not only affect political attitudes directly related to the phenomenon. Citizens also respond to immigration frames by losing trust in media, supporting stronger executives and feeling more ‘culturally’ European. These three patterns could be a part of a larger dynamic in Europe: as the manifestations of perception for the three fundamental aspects of political reality (institutions, authority and identity), they may represent both the normative and practical dimensions of an independent belief system.

As media skepticism, preferences for concentration of power and cultural Europeanness serve as the interrelated proxies of populist ideals like moral struggle against evil elites, unmediated representation and homogeneity of the people respectively, these three concepts can serve as proxies for identifying a nascent thick populism on the individual level. I posit that, under the influence of illiberal elites’ production of sovereignty threats and power aggrandizement, mass populist mindset assumes more complex and structured forms, culminating with an emergence of a separate proto-ideology, based on the normative specification of good and proper ways of addressing life’s problems. This would constitute a significant advance for the study of populism, which so far conceptualized populism only as a ‘thin’ ideology, only discursively augmenting left or right wing positions.