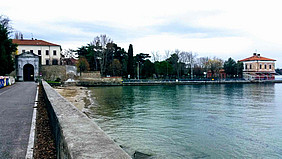 Christian Promitzer - From the “Plague Front” to sanitary buffer states: Habsburg's policies of disease prevention vis-a-vis the Ottoman Empire from the Congress of Vienna to the turn of the 20th century

Christian Promitzer - From the “Plague Front” to sanitary buffer states: Habsburg's policies of disease prevention vis-a-vis the Ottoman Empire from the Congress of Vienna to the turn of the 20th century

The period from the 1820s up to the turn of the 20th century saw a profound change in the preventive means against epidemic diseases; in Central and Southeastern Europe this shift would lead to the reduction and eventual abolition of terrestrial quarantines which the Habsburg Empire during the 18th century had established against the threat of plague from the Ottoman Empire. At the time the “plague front” of quarantine stations and sanitary cordons at the Austrian Military Border would span from the Adriatic far into the continental bulk of Eastern Europe in order to repel the plague – in its actual and metaphorical manifestations.

In 1831, however, the trust in quarantines and sanitary cordons got abruptly lost: during a devastating cholera pandemic epidemic, arriving both from Russia and the Balkans, they simply failed to prevent the death of several thousands of people. Apart from this tragic event, the traditional Austrian system of epidemic defense was to be likewise put under question by the then rapid development of industrial capitalism and global trade as well as by the simultaneous introduction of steam navigation which enabled radically shortened shipment times of imported goods from the Orient: quarantines were considered an obstacle and therefore had to be removed. And indeed, the 1856-Peace Treaty of Paris, which ended the Crimean War, would liberate the Danube river down to its mouth into the Black Sea from permanent quarantines.

When the Treaty of Berlin of 1878, which established independent and autonomous Ottoman successor states in the Balkans, was put to force, the “permanent” sanitary cordon at the Austrian Military Border was not existing any more. The successor states would be anyhow quick to establish their own sanitary cordons against the receding Ottoman Empire and against any diseases – actual and metaphorical ones – which would come from this polity.

University of Exter, College of Humanities