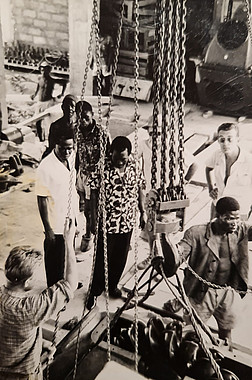 BB: Goran Musić & Rory Archer - " A Socialist Workplace in Postcolonial Africa: A Connected History of the Yugoslav Workforce in Zambia"

As a founding member of the Non-Aligned Movement, socialist Yugoslavia stood between East and West (aligned neither with Soviet-style central economic planning nor the capitalist West), setting much stock in its economic, diplomatic, and cultural relationships with the Third World.

Newly independent African countries like Zambia became Yugoslavia’s primary allies in the Global South. This presentation will give an overview of the recently initiated research project at the University of Vienna dedicated to the study of Yugoslav companies’ workforces in Zambia. It poses questions about everyday dimensions of Yugoslavia’s links with postcolonial African societies, connecting class, labour, and race into studies of the Yugoslav region's ambiguous relationship to the Global South through the lens of social history.

Goran Musić Goran is a researcher and lecturer at the Research Platform for the Study of Transformations and Eastern Europe (University of Vienna). He is the Principal Investigator of the above-mentioned project and the author of 'Making and Breaking the Yugoslav Working Class: A Story of Two Self-Managed Factories' (CEU Press).

Rory Archer is a social historian of 20th century Southeast Europe whose research is focused on the social history of Yugoslavia. Parallel to working on this Yugoslav-Zambian project, he leads a project on the history of intra-Yugoslav Albanian migration during late-socialism at CSEES, University of Graz.