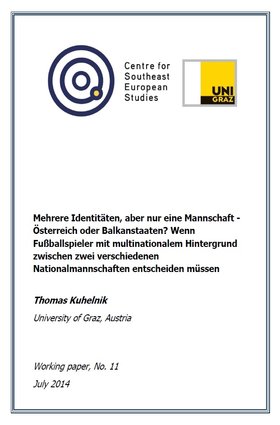 Description:
This article examines on what motives male football players who are eligible for more than one national football team choose the nation they play for. As a result five categories are developed based on interviews with affected football professionals who are eligible to play for Austria or a state from former Yugoslavia. The first category, namely esteem, subsumes players who decided in favor of the football association that reached out earlier or more persistently. The second category, loyalty, shows players who are grateful to one nation - e.g. for enabling them a good football education. The third category, patriotism, refers to players who identify themselves with one nation only. The fourth category, pragmatism, summarizes those players who decided on the basis of practical reasons - e.g. the perspective of getting nominated or the strength of the national squad. And finally there exists a fifth category named multi-antecedens. This category sums up the small group of players whose decision is based on numerous equal reasons.

About the Author:
Thomas Kuhelnik currently studies History and German at University of Graz. Furthermore he works as a freelance journalist at Kleine Zeitung in Graz. He holds a BA in German Studies.