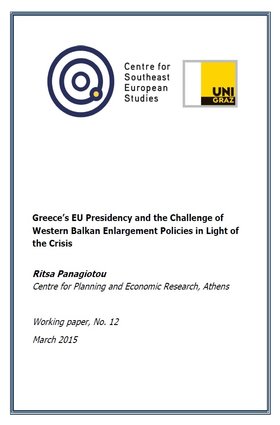 Description:
On January 1st, 2014, Greece assumed the Presidency of the European Council, at what was a critical juncture both for the country itself and the European Union as a whole. As far as policies towards the Western Balkans were concerned, the Greek Presidency was exposed to two contrasting dynamics: on the one hand, there were high expectations due to the positive legacy that had been established during ist 2003 Presidency (where Greece was seen as a “promoter” of the Balkans accession prospects in Europe), and on the other hand, there were low expectations due to the deep crisis that had deprived the country of the prestige, strength and stature necessary to achieve important breakthroughs.This paper will present an appraisal of the progress achieved in the EU accession process of the Western Balkans during the Greek Presidency, which will be analysed through the prism of these simultaneous expectations and limitations. The paper will begin by presenting the legacy of the 2003 Greek Presidency, which was by all accounts a landmark that also included major milestones in the Western Balkan states’ relations with the EU and in the enlargement process. It will then proceed with an analysis of the challenges confronting the 2014 Presidency in light of the extraordinarily difficult circumstances − both for the EU and for Greece − that have created a negative environment for enlargement. The third part of the paper will examine and evaluate the accomplishments and progress achieved during the Greek Presidency, while the final section will attempt to draw some conclusions concerning the enlargement process during this difficult period.

About the author:
Ritsa Panagiotou is a Senior Research Fellow at the Centre of Planning and Economic Research in Athens (KEPE). She holds a B.A. in Political Science and Russian from Wellesley College, and an M.Phil and a D.Phil in International Relations from Oxford University (St. Antony’s College). For several years she worked as a Research Associate at the European Business School (INSEAD) in Fontainebleau, France. She has been a Visiting Professor at the Athens University of Economics and Business and at the University of Athens Postgraduate Programme in Southeast European Studies. In 2011 she was a Visiting Research Fellow at the European University Institute in Florence, Italy. She has published in many scholarly journals, including Communist and Post-Communist Studies, Journal of Balkan and Near East Studies, the Journal of Communist Studies and Transition Politics, and Journal of Southeast European and Black Sea Studies.