Defining Minorities and the Borders of new Nation States: The Case of Bulgaria and Greece 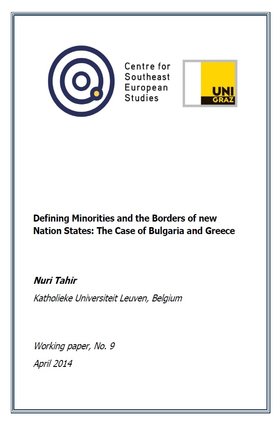 Description:
One of the most sensitive issues that continues to affect security in Southeast Europe has its roots in the creation of nation states and their borders. Somehow the existence of national minorities in the Balkans creates a continuous link with the past that results in the continuing reinterpretation of the history even until today. The creation of Greece and Bulgaria as new nation states did not put an end to the minority issues but rather made them more complicated. The Greek and Bulgarian agenda to enlarge their borders at the expense of the Ottoman Empire began to affect the Muslim population living in these countries. Eventually, for the first time in their history, Muslims living in the region became a minority. The conflicts that occurred in the beginning of the twentieth century gave a new definition to nationalism in Southeast Europe, where apart from religious affiliation, ethnic identity became a clear line of division. With the change of borders, forced migration became accepted as the only method to create homogenous states in the region. This is why the Greek-Bulgarian Convention for Reciprocal Emigration and Greek-Turkish Convention for Population Exchange were signed. It was a time when international law was used to serve the needs of new nation states to homogenize their territories.

About the Author:
Nuri Ali Tahir is Marie Curie Research Fellow at Katholieke Universiteit Leuven in Belgium. He has obtained his PhD in Transborder Policies for Daily Life program from the University of Trieste, Italy. He holds BA and MA degrees in International Relations from Gazi University in Ankara, Turkey. He has been visiting research fellow at the Centre for Southeast European Studies as Ernst Mach Grant scholar. His research interests are related with the issues of nationalism and minorities, crossborder cooperation and minorities living in border regions, conflict in Cyprus and the European Integration of Southeast Europe. His research mainly focuses on countries such as Bulgaria, Greece, Turkey, Cyprus and Macedonia.