‘European Serbia’ and its ‘civil’ discontents: beyond liberal narratives of modernisation 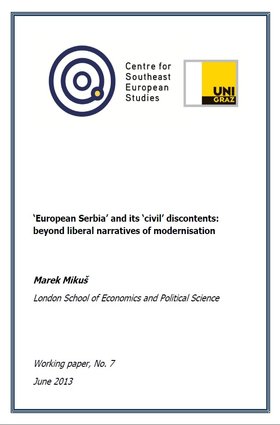 Description:
In 2010–2011, Europeanisation equated with modernisation of the state and society as such represented a key policy of the Serbian government. The sociopolitical forces known as ‘Other Serbia,’ ‘Civil Serbia’ or ‘civil society,’ which had always identified as ‘pro-European,’ criticised the process of Europeanisation as formal rather than substantial. Yet these ‘civil’ critics, of which particular attention is paid to the work of the historian Dubravka Stojanović, shared with the government the same basic understanding of Europeanisation which could be described as a Balkan variation on evolutionist modernisation theories. Furthermore, Stojanović and other ‘civil’ historians contextualised this ‘blocked’ Europeanisation as the most recent episode in a long history of perpetual Serbia’s failure to modernise. This narrative was based on the essentialist idea of Serbian ‘premodern political culture,’ a teleological and ideologically driven notion of modernisation, and a pre-theoretical concept of the state. Building on contemporary approaches to modernity and the state in anthropology and other disciplines, the paper suggests ways of reframing these issues and identifies possible avenues of an alternative research programme.

About the Author:
Marek Mikuš is a PhD candidate in anthropology at the London School of Economics and Political Science. His forthcoming dissertation with the working title What Reform? ‘Civil Societies,’ State and Social Antagonism in ‘European Serbia’ addresses a set of variously synergic, contradictory, or simply concomitant political processes which transform the governance of society and individuals in the liberalising and ‘Europeanising’ Serbia. These intentional but open-ended ‘reforms’ are traced across the state and multiple ‘civil societies,’ understood as ‘scenes’ of associational life which reflect and channel broader social antagonisms over desirable changes and the essential meanings of the state, national polity, and democracy in Serbia. Marek’s research interests include anthropological approaches to politics, state, civil society, development, neoliberalism, postsocialism, democracy, European Union, communitybased biodiversity conservation, and Roma in the Czech Republic and Slovakia.