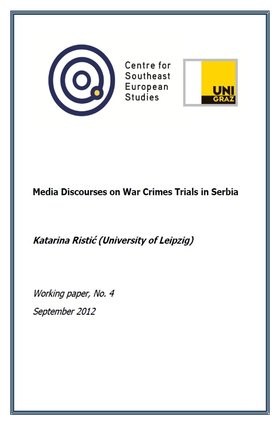 Description: The ICTY trials challenged victimhood memory of war in Serbia, stressing direct involvement and criminal responsibility of political and military leadership in conflicts in former Yugoslavia. By silencing the crimes, demonizing the ICTY, undermining witnesses’ testimonies and continuous self-victimisation, media discourse on war crime trials perpetuated nationalist, victhimhood narratives on war. The blame is transferred to the ICTY, while the Serbian accused were assigned with herodefendant roles. In other words, language frames and strategies of presentation formed one particular portrayal of war crime trials, resembling what Assmann calls 'Verlierergedaechtniss' characterised by silence about atrocities, national shame and self victimization. The aim of the article is to show how the memory of war was created in the media portrayal of war crime trials. The analysis of trial discourses in Serbia is theoretically grounded in transitional justice and collective memory approaches. Methodologically it is based on critical discourse analysis applied to 1,639 articles published in five dailies (Danas, Blic, Politika, Večernje novosti, Kurir) and two weeklies (NIN, Vreme) in the period 2001-2011. The material is collected to cover the whole political spectre: more leftist and liberal, pro-European media, like Vreme and Danas, centrist Blic and Politika, and rightist Večernje novosti, Kurir and NIN.

About the Author:
Katarina Ristić is a PhD Candidate in the Department of Southeast European History at the Leipzig University. She holds a Diploma in Philosophy from the University of Belgrade. Her research interests include transitional justice in post-conflict societies, nationalism and gender studies. More specifically, her work examines memory of war crime trials in former Yugoslavia. She has also worked in the Belgrade Humanitarian Law Center, an NGO dedicated to dealing with the past in the former Yugoslavia.