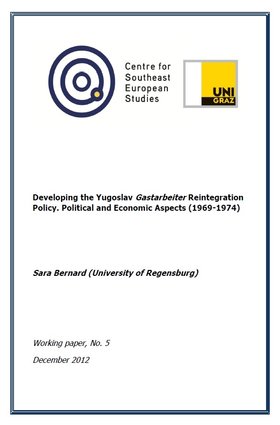 Description:
The emigration of workers, which Yugoslavia legalised in 1963, reached a peak between 1969 and 1973 when around 1.3 million Yugoslav workers and family dependants were estimated to be abroad. The first oil crisis of November 1973 brought to an end to this massive emigration, as the principal recruiting countries decreed a stop to the further recruitment of foreign labour forces. More generally, this implied that the conditions for the temporary employment of the Gastarbeiter (guest workers) vanished, and that they should return to their country of origin. Analysing statistical and economic data, archival documentation, and press material this paper elaborates on the development of the Yugoslav emigration patterns and on the Yugoslav migration policy during the phase of massive emigration which preceded the halt on recruitment of foreign labour forces in Western Europe. It will show how attempts to promote the workers’ return were undertaken before further recruitment was halted but encountered unexpected difficulties. Investigating the political and socio-economic context in which these initiatives had been undertaken, this paper advanced the thesis that the principal reason lies in the decline of interest in creating a Yugoslav common economic and labour market, which deepened the problem of regional underdevelopment.

About the Author:
Sara Bernard is a PhD candidate at the University of Regensburg in the field of South-East European history. Her doctoral project analyses emigration and return migration in socialist Yugoslavia with a multidisciplinary approach. Her research interest include migration history, (trans)nationalism, rural development, family systems and cultural and social memory, with a regional focus on south-eastern Europe.