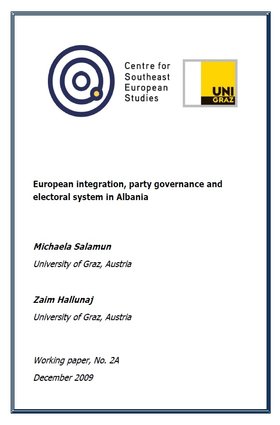 With elections scheduled for June 2009, the term of office of the current DP-led government is drawing to an end. It is therefore time for stocktaking regarding one of the highest priorities of Albanian politics, i.e. European integration policy. This policy has been set out in the Government Programme 2005-2009, promoted in annual progress reports of the European Commission, and coordinated and implemented by relevant institutions in Albania. The paper investigates, if certain policies regarding the democratic state, i.e. party governance and the electoral system, have actually promoted European models and moved the country closer to European values. It concludes that such policies have promoted European integration to some extent: Party governance has continued to be polarised between the main governing and opposition parties; however, inter-party compromise was found e.g. concerning constitutional amendments, although smaller parties protested the adoption of the new Electoral Code. The serious problem of corruption within both, the executive and the judiciary, still needs to be tackled in an adequate manner.

About the Authors:
Michaela Salamun is researcher and lecturer for public law at Graz University. She has a PhD in law and master degrees in law and English-American studies. She was a legal advisor for the OSCE in Albania (2000) and has held fellowships in the Western Balkans (2005/6), the European University Institute (2007) and Harvard University (2008).

Zaim Hallunaj holds a law degree from Luigj Gurakuqi University of Shkoder and is a PhD candidate at Graz University. He is currently research assistant in a project funded by the European Parliament on property issues following the conflict in FRY at the Center for Southeast Europe at Graz University.