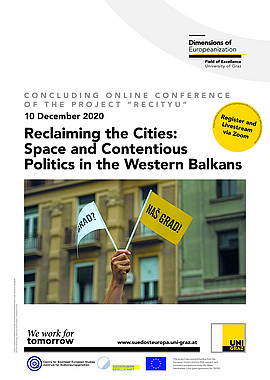 Reclaiming the Cities: Space and Contentious Politics in the Western Balkans

Over the last decade, citizens of the Western Balkans region have increasingly been advocating for inclusion in decision-making affecting the restructuring of their urban habitat. This emerging activism addresses the so-called Right to the City, defined as the collective right to intervene to reshape the urbanisation process. A variety of citizen initiatives emerged, brought about by grassroots groups reclaiming through different tactics the citizens’ right to participate in decisions related to urban planning and the use of public space. The opposition to commodification processes has inspired also social action and protests across the region. With the broad aim of constructing “cities for people and not for profit”, grassroots groups and citizens’ committees mobilized against the privatization of space and services, gentrification, pollution, and housing rights, amongst others. They formed citizens’ committees, employed street protests and at times created political parties to access the institutional arena. Often gathering under the common banner of the “right to the city”, these groups shed light on the increasing importance of cities and urban settings for social and political mobilization.

The final workshop of the project “Reclaiming the cities in the post-Yugoslav space” (ReCitYu), funded from the EU Framework Programme for Research and Innovation HORIZON 2020 – Marie Sklodowska-Curie actions, brings together scholars researching Right to the City groups and urban movements in the Western Balkans. As a conclusion of the two-year research project lead by Chiara Milan, the workshop gathers scholars from and experts of the region to present their research dealing with space and contentious politics, urban movements and anti-eviction housing struggles, and exploring how Right to the City groups have responded to controversial projects of urban restructuring and to the privatization of public space in the region. The workshop will also tackle the transformation of some Right to the City groups into citizens platforms and political parties.

Brown Bag:Modernism on the Margins: A Transnational Fellowship of Southeast European Women Intellectuals, 1923-1939