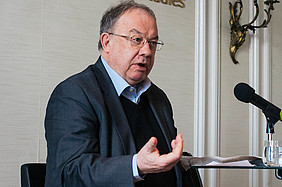 Laïcité (strict separation between State and Chruch) was born from a political struggle in the XIX century between the Republic and the Catholic Church. While the growing secularization of the French society in the second half of the XX century led to a dechristianization of the country, the rise of Islam as a religion entailed a state policy of enforcing a stricter "laïcité", defined in terms of culture and values. But the paradoxical consequences is that this recent offensive is undermining any religion, including what is left of christianity.

Olivier Roy is a French political scientist, professor at the European University Institute in Florence. He has published articles and books on secularisation and Islam including "Global Islam", and The Failure of Political Islam. His field works include Political Islam, Middle East, Islam in the West and comparative religions. He is known to have "a different view of radical Islam" than some other experts.