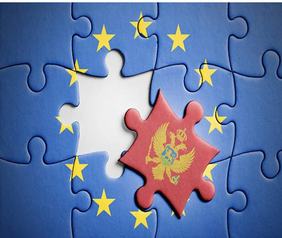 Vladimir Vučković: The European Union, the Rule of Law, and Regional Cooperation

The volume aims to examine Europeanization of Montenegro, a regional frontrunner among all Western Balkans in the EU integration process, through EU impact on domestic governmental changes by focusing on three political membership conditions of the EU: judicial reform, fight against the corruption, and development of regional cooperation and good neighbourly relations.

This book is based on the argument of the EU transformative power having produced negatively reinforcing effects in key accession criteria in the candidate country within the ten years of integration period. The given deficiency of fulfilment of political conditions in Montenegro is, on the one hand, primarily the result of an inconsistent and inefficient EU conditional policy, and unfavourable domestic factors to appropriately conduct reform activities, thus resulting in generally weak and mitigating reform progress. In addition, the book has claimed that the effective adoption and alignment with the EU accession demands does not solely depend on interdependency of the EU and domestic factors (as it was explained by the Schimmelfennig and Sedelmeier theory of Europeanization), but rather it also substantially depends on influence of other international factors, namely the influence of Russia and China in the Western Balkan region. The state’s possibility to choose the policies of alternatives instead of opportunities i.e. to cooperate with other international factors which do not question political legitimacy of the domestic ruling elites nor do they interfere into internal political affairs, has significantly affected reduction of euphoria for the advance in the EU accession process with the domestic political leaders. The current EU foreign policy in the form of the enlargement process more likely contains characteristics of charade in the process of European integration of Montenegro. This particular point may be witnessed not only when the case of Montenegro is taken into consideration, but also when the rest of the Balkans is, in terms of the EU enlargement policy that is, analysed.

Vladimir Vučković is a visiting lecturer in the Department of International Relations and European Studies at the Masaryk University, the Czech Republic with a research interest focusing on the European Union, populism in Europe, and Western Balkan political and socio-economic developments. He has held a visiting fellowship at the Department of Political Science at the University of Stockholm (2017) and Centre for Southeast European Studies at the University of Graz (2021). He is the author of the monograph Europeanizing Montenegro: The European Union, the Rule of Law, and Regional Cooperation (2021) and editor of the volume Balkanizing Europeanization: Fight against Corruption and Regional Relations in the Western Balkans (2019). His publications have appeared in the Journal of Slavic Military Studies, Romanian Journal of European Affairs, and Europe-Asia Studies and Political Studies Review, among others