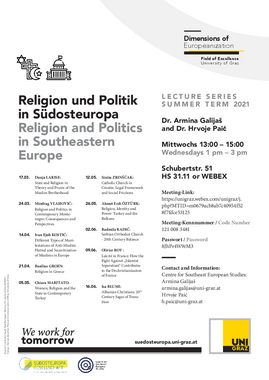 During the lecture, we will detect and then elaborate in detail on various manifestations of anti-Muslim hatred in the countries of Western, Eastern, and South-Eastern Europe

We will provide an answer to the question of whether there is something that is potentially common to all actors who promote anti-Muslim hatred, and, we will look at the process of how Muslims, through various forms of reductionism and essentialization, are being transformed into a security threat to the societies and systems in which they live.

Ivan Ejub Kostić is an expert in islamic studies; he graduated from the Faculty of Philology at the Department of Oriental Studies, Arabic Language, and Literature and obtained a master’s degree in the same department. He is one of the founders of the Balkan Centre for the Middle East and became its executive director in 2013. Ivan is co-author or sole author of several books on Islam. Also, he is a member of the steering committee of the European Muslim Network based in Brussels, a member of the editorial board of the journal of religious sciences Kom, and the editor-in-chief of the online platform for contemporary Islamic thought and culture Algoritam. He is a regular contributor to the Yearbook of Muslims in Europe, as well as to the ‘Islamophobia in Europe’ project sponsored by the SETA Foundation.