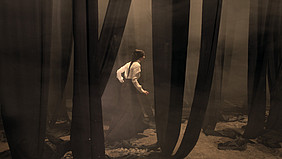 BB: Elena Marchevska - Balkan is not Dead: Staging European identity in the plays of Dejan Dukovski

My research has been focused on how Europeanization process has been portrait in theatre plays and production in three South-Eastern European countries: North Macedonia, Serbia and Bosnia and Herzegovina. I have been interested in how theatre is used as a medium to discuss local and regional tension between European belonging and Balkan identities. As argued by Jestrović: ‘Theatre is a unique worksite for a number of reasons: its immediacy—the here and now—that always carries the potential of spillage, of overflow, from the stage into the auditorium and beyond or the other way round—from the outside into the auditorium and onto the stage. In other words, it holds the possibility of the  unexpected, of a rupture…’ (2019:251).

In this paper I will discuss the work of the playwriter  Dejan Dukovski, and his collaboration with the theatre director Aleksandar Popovski. I am particularly interested in how this artists duo challenge and question Europeanization in their work produced between late 1990s and early 2010. And how their process has been influenced by the political and social changes triggered by the accession negotiation with the European union. My focus is on scoping and highlighting the alternative imaginary forms of identification proposed by the artists.