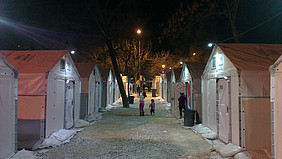 This presentation looks the so-called “refugee crisis” in Serbia through liminal lenses. It argues that argue this event reshaped the border regime in Southeastern Europe (SEE). The novelty of this border regime lays in the push backs practices which oppose the principle of non-refoulement guaranteed under international human rights law. Also, a new feature of the border regimes in SEE is the normalization of the EU border guards’ violence as a method of migration deterrence that was not practiced before 2015 in this region. Furthermore, the new quality of the European border regime is an entrapment of migrants and refugees in circular mobility stranded in a liminal space at the gates to the EU. In this ambiguous space of transit and space of containment migrants are “caught in mobility”, neither able to go further or back. Finally, the disturbing occurrences that took place at the turn of 2015 and 2016 gave rise to a strong and stable civil society dedicated to migration issues.