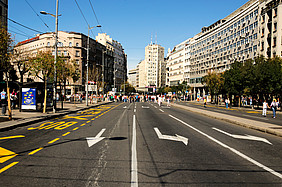 Over the last decade, we can observe the emergence of radical left electoral actors in Southeast Europe. This dissertation project describes and compares two processes which brought to the formation of such actors: the Initiative for Democratic Socialism (Slovenia) and Don’t let Belgrade D(r)own (Serbia). Its main aim is to outline mechanisms which motivate activist groups to engage in electoral politics in spite of having no previous experience in electoral activism. Its central argument is that electoral turn, taken as a case of movement’s strategic innovation, can be explained by two key factors: accumulated long-term experience of inefficiency in NGO/ movement-based activism, and change in perception of political opportunities through the experience of eventful protest. In addition to establishing similarities across the two cases, comparative design serves to investigate how each context brought to significantly different outcomes at the level of electoral actors’ discursive tactics in spite of similar mechanisms at work in their formation.

Karlo Kralj is a PhD candidate in political science and sociology at the Department of Political and Social Sciences of Scuola Normale Superiore and a member of Center on Social Movement Studies. As part of his doctoral project, Karlo is investigating recent cases of radical left movement parties in post-Yugoslav context. His main research interests are social movement studies and left-wing activism in postsocialist Europe. Before starting his doctoral studies, Karlo used to be active in Zagreb-based organizations, mainly Croatian Youth Network and Centre for Peace Studies, where he took part in organizing advocacy and protest campaigns.

Lecture: Confronting Femicide in Turkey: Causes, Consequences, and Resistances to the increase of Violence against Women

LECTURE by Melek Önder, Istanbul - Confronting Femicide in Turkey: Causes, Consequences, and Resistances to the increase of Violence against Women