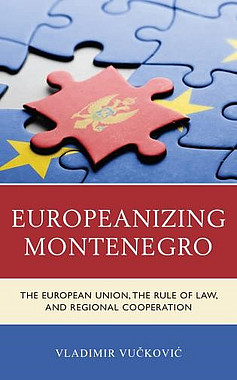 The volume aims to examine Europeanization of Montenegro, a regional frontrunner among all Western Balkans in the EU integration process, through EU impact on domestic governmental changes by focusing on three political membership conditions of the EU: judicial reform, fight against the corruption, and development of regional cooperation and good neighbourly relations. This book is based on the argument of the EU transformative power having produced negatively reinforcing effects in key accession criteria in the candidate country within the ten years of integration period. The given deficiency of fulfilment of political conditions in Montenegro is, on the one hand, primarily the result of an inconsistent and inefficient EU conditional policy, and unfavourable domestic factors to appropriately conduct reform activities, thus resulting in generally weak and mitigating reform progress.

Vladimir Vučković is a visiting lecturer in the Department of International Relations and European Studies at the Masaryk University, the Czech Republic with a research interest focusing on the European Union, populism in Europe, and Western Balkan political and socio-economic developments. He has held a visiting fellowship at the Department of Political Science at the University of Stockholm (2017) and Centre for Southeast European Studies at the University of Graz (2021).